Looking for tomorrow's betting tips? Livetipsportal sports betting and football data is your source of analytical and stats-based betting predictions for the most popular leagues and international competitions.

Naturally, you can follow our advice and place the same bet free of charge. If you decide to do so at a new bookie, you can benefit from the 1xbet welcome bonus. We have already tested the offer for you in detail.

In a very tough Champions League group, Barcelona have already sealed top spot with a game to spare. Inter Milan and Borussia Dortmund, however, need to get a result to guarantee their spot in the next stage of the competition. For Inter Milan, it’s all in their hands. Win and they guarantee qualification, irrespective of what happens in the Dortmund vs Slavia Prague match. Should they lose, then what happens in Dortmund could have a bearing on their knock out stage chances.

The match between Inter vs. Barca will take place at the historical San Siro stadium on the 10th of December.

Inter come into this match knowing it’s either win or bust, considering Dortmund play the bottom-placed club in Group F. In the reverse fixture, Inter Milan scored first and held their own at the Nou Camp, but were undone by Luis Suarez’s double – the last courtesy of a Lionel Messi assist.

The Nerazzurri come into this match topping the Serie A table after their rejuvenation, courtesy of Antonio Conte. The team would be looking to wreak havoc on the opposition’s defence with the in-form strike partnership of Lukaku and Lautaro Martinez. And we all know how Barca’s defence can crumble under pressure; case in point – the second leg of the Champions League Semi-Finals at Anfield.

If we just typed the name “Lionel Messi” and left it at that, everyone would understand. The mercurial number 10 for Barcelona has the ability to make all the difference. and would cause any defence trouble, but he doesnt play. Being a dead-rubber for Barcelona, it’s unclear how they’ll be set up and how they’ll approach the game.

Ernesto Valverde’s side are currently on a run of six consecutive wins, with a 5-2 drubbing of Mallorca at home on the last of the six wins. In that match, Messi scored a hat-trick. Many people thought Barca were going to win the Champions League last season, before they were stunned by Liverpool. This season’s competition also seems like an open one.

Barca do not exactly have a sterling record against Italian opposition away from home. In 24 matches, they’ve only won six, drawn eleven and lost seven. Added to the fact that the team has already sealed top spot, is an incoming El Clasico at home to Real Madrid on December 18, which might force Valverde into some form of rotation.

Looking at the stakes, Inter would and should be fielding their strongest side. It’s hard to try and decipher the team Barca would put out, but it’s certain they would want to keep up their winning momentum just before the El Clasico – fingers crossed.

Despite securing top spots in the group, Barcelona would like to increase their winning run, which currently stands at six; and with Messi being fit and more likely to play, the game can be turned on its head at any moment with his superior individual skills. Statistics point to a Barca win or at the very least a draw. In terms of goals, 60% of Inter’s last five home games have resulted in over 2.5 goals, while 60% of Barca’s last five away matches have resulted in the same. This also points to a likely over 2.5 goals; plus the fact that Inter need to go for it, means they’ll definitely be leaving space behind for Barca to take advantage of. You can read more betting tips on the match here. 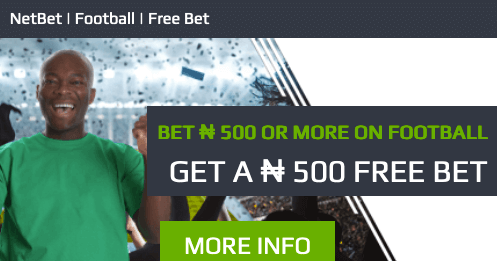 Get NGN 500 Free Bet on NetBet

A simple promotion by NetBet. Simply play an accumulator with at least three games, stake NGN 500, and earn the same amount after the bet is settled. The only additional requirement is for each game to have at least 1.10 odds. Each user is entitled to only one free bet per week. Click here for the Netbet review.

Bet at Netbet and get your Free Bet!